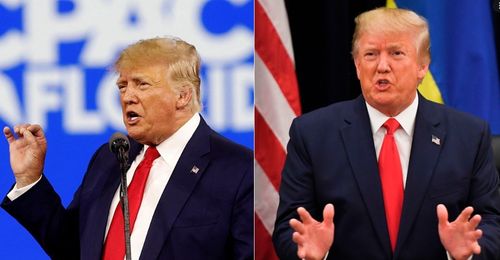 Trump says Ukraine war, inflation wouldn’t have happened if he were president.

Former President Donald Trump said on Monday that if he had been president, recent events like the war in Ukraine and skyrocketing inflation would not have happened.

Donaltram is reportedly preparing for the 2024 presidential race, according to a July 4 news release.

Trump said “it’s a big war out of control in Europe” and “it’s not looking good” for the United States at the moment because of “high inflation in memory”.

He added that Wall Street’s difficult start to the year and high energy prices should be considered “good news” compared to other ongoing problems in the country.

Donald Trump wrote in a post on his own Truth Social, “If I were president, none of this horrible thing would have happened !!!”

In an earlier post, Trump Representative Liz Cheney (R-YO.) Called, in response to the Jan. 6 election committee hearing, that he was a “provocative and disgusting man.”

Donald Trump called the January 6 panel “political thugs” who were involved in the hearing of his impeachment.

A survey found that seven out of ten people said they did not want to see Biden as the next president.

6 in 10 voters said they don’t want Trump to run again, with 1 in 3 voters saying he will divide the country.

Former US President Donald Trump, who has been accused of withholding nearly 400 400 million in military aid from Ukraine, has said the country’s current crisis “would never have happened” if he had remained in office.

Trump said in a statement on Thursday, “This terrible situation in Ukraine would never have happened if I had been in office!”

He made similar comments in an interview with Fox News before Trump’s speech on Thursday. When Russia’s invasion of Ukraine began to unfold, he blamed the 2020 US election situation, which he called “fraud.”