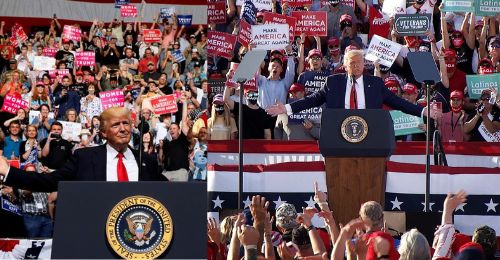 45th President Donald Trump has announced that he has canceled his much-anticipated Arizona rally on Saturday.

Because you all know that Thursday was the death of his first wife, Ivana Trump. This is the reason why Donald Trump announced the suspension of the Arizona rally.

In this regard, Donald Trump shared information on his own social media, Truth Social, on Friday. He wrote,

“Out of love and respect for Ivana, our big Arizona Rally will be postponed until next Friday.”

Ivana Trump, the ex-wife of President Donald Trump, with whom she shared three children, including Donald Trump Jr., Ivanka Trump, and Eric Trump, died on Thursday at the age of 73, as previously reported.

Authorities responded to a call Thursday afternoon of a man in cardiac arrest, according to ABC News. Officials later revealed that he died of natural causes.

Trump shared the news with his supporters, writing on Truth Social, “I am deeply saddened to inform all those who loved her, of whom there are many, that Ivana Trump has passed away at her home in New York City.”

“She was a wonderful, beautiful, and amazing woman, who led a great and inspirational life,” he continued. “Her pride and joy were her three children, Donald Jr., Ivanka, and Eric. She was so proud of them, as we were all so proud of her. Rest In Peace, Ivana!”