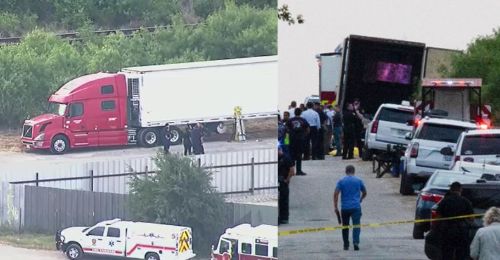 Texas, US, the bodies of 48 people were recovered from a lorry. 46 migrants were found dead.

Locals reported seeing a lorry lying on the side of the San Antonio railway line for a long time.

Not finding anyone around the car, the police broke down the door,
Inside, they see rows and rows of corpses.

Police have arrested three people on suspicion of being involved in human trafficking.

The head of the San Antonio Fire Service said,

“We got the news and went to the spot. We broke down the car door and recovered the body. Those who were rescued alive,

Their condition is also fragile. Because there was no food inside. There was not even adequate ventilation.

read more  Donald Trump declares solidarity with Iranian protesters: 'We stand with everyone 

The bodies of 16 people, including four survivors, rescued from inside the lorry were very hot. They all suffered from heat stroke. However, everyone was unconscious when they were taken to the hospital. “

He added that “no sign of water was found inside the refrigerator. There was no effective air control inside. However, he hoped the rescued people would recover quickly.”

The administration’s idea is that they entered the United States illegally through the border in Mexico.

Later, the driver fled, leaving the lorry loaded with immigrants. It is unknown at this time what country the victims are from.
The Texas governor has blamed President Joe Biden’s immigration policy for the tragedy.

“The truck loaded with immigrants entered through the Texas border.
Joe Biden is responsible for the deaths of these people. Because it was already known that it would lead to immigration policy and crisis. ”

A Mexican delegation has already left for the scene.

However, there are doubts as to whether the deceased was a Mexican citizen.

More Read: 2024 intrigue: DeSantis declines to ask Trump for reelection endorsement
The history of human trafficking in the United States through the Mexican border is very old and the number of accidents involved in human trafficking is not insignificant.

Local media reports say many people have died on their way from Mexico to the United States.

Earlier, in 2003, 19 people fell into a truck while entering this southern town of Texas.

There are a number of other cases in which the process of human trafficking in lorries began in the nineties.

The intruders were placed through a small space inside the house to protect them from police surveillance and the dog’s sense of smell.

Rotten watermelons or smelly items are sometimes left in front to evade the police.