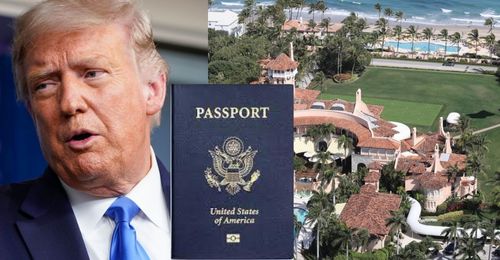 Former President Donald Tum has shared a surprising information about the loss of his passport on his Truth social media.

Donald Trump revealed another surprising tidbit of information about the FBI’s raid on his Mar-a-Lago private residence, sharing in a post on Truth Social on Monday that they had “stolen” three of his passports.

The 45th President Donald Trump wrote that, “In the raid by the FBI of Mar-a-Lago, they stole my three Passports (one expired), along with everything else. This is an assault on a political opponent at a level never seen before in our country. Third World!”

Last week, the FBI raided Trump’s home in Palm Beach, Florida, in an unprecedented move from the agency, marking the first time in history that a presidential home has been raided.

Disclose.tv shared a tweet on this topic. Below are the tweets for you:

“It’s prosecutorial misconduct, the weaponization of the justice system, and attacks by radical left Democrats who desperately don’t want me to run for president in 2024,

“Especially based on recent polls, and who will do anything to stop Republicans and conservatives alike in the upcoming midterm elections,” Trump said in a statement last week responding to the FBI’s actions.

Last weekend, Trump took to Truth Social for the “ridiculous political grandstanding of ‘breaking in’ to a very storied, important and highly visible place right before the midterm elections”.

He also noted on the matter that, ‘The whole world was watching as the FBI rummaged through the former First Lady’s closet (and clothes!) alone and unchecked.

“He further remarked that “there was no way of knowing if what they took was legitimate, or was there a ‘plant?’ This was, after all, the FBI!”

But given the raid on President Donald Trump’s private home, one question many Americans are asking is: “How does the country follow a dangerous new precedent set by the FBI’s seizure of property and personal items of the President of the United States.”