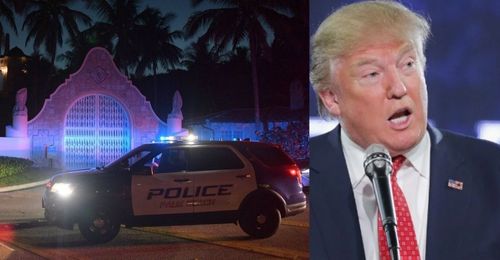 He wrote in the post, “I will continue to fight for the Great American People!” despite that his home is “under siege.”

In an unprecedented FBI raid on his Mar-a-Lago estate in Palm Beach, Florida,
Donald Trump immediately vowed to continue fighting for the American people.

According to the outlet:

“An FBI source confirmed that FBI agents from Washington, D.C. who are on the bureau’s Evidence Response Team conducted the raid and notified the Miami Field Office just before.

Per standard protocol, FBI Director Wray and Attorney General Garland were aware of the raid even if shortly before and would have been fully briefed.”

Standing strong amid the “unannounced raid,” President Trump wrote, “It is prosecutorial misconduct, the weaponization of the Justice System, and an attack by Radical Left Democrats who desperately don’t want me to run for President in 2024.”

Fox News has expressed an opinion about this campaign on Donald Trump. According to Fox News, the 45th president was not home at the time of the raid because he was visiting New York City.

Statement by Donald J. Trump , 45th President of the United States of America

These are dark times for our Nation , as my beautiful home , Mar A – Lago in Palm Beach , Florida , is currently under siege , raided , and occupied by a large group of FBI agents . Nothing like this has ever happened to a President of the United States before .

After working and cooperating with the relevant Government agencies , this unannounced raid on my home was not necessary or appropriate . It is prosecutorial misconduct , the weaponization of the Justice System , and an attack by Radical Left Democrats who desperately don’t want me to run for President in 2024 , especially based on recent polls , and who will likewise do anything to stop Republicans and Conservatives in the upcoming Midterm Elections Such an assault could only take place in broken ,

Third – World Countries . Sadly , America has now become one of those Countries , corrupt at a level not seen before . They even broke into my safe ! What is the difference between this and Watergate , where operatives broke into the Democrat National Committee ? Here , in reverse , Democrats broke into the home of the 45th President of the United.

For more details of this statement, you can see the tweet given below.