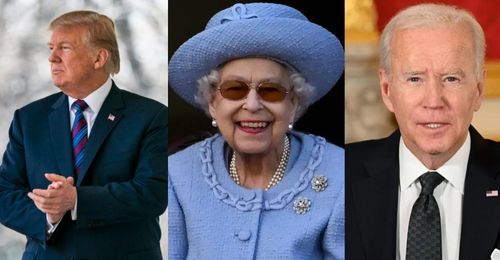 Joe Biden blasted former President Donald Trump on the international stage for spoiling the nation after suggesting he would have preferred Queen Elizabeth II’s funeral.

Former President Donald Trump was not invited to the funeral, which took place in Westminster, London on Monday Beadin and First Lady Jill Beadin were badly stuck in traffic on their way to the venue.

When they reached the event, they reached the final stage of the event. They arrived in a heavily armored vehicle known as “The Beast” after being granted a special concession. In addition, dignitaries in the country were banned from using their own vehicles. So they used a bus for the funeral instead.

They were seated in the 14th row because they were sitting there about 12 minutes after the ceremony began at the funeral. Biden sat next to the president of Switzerland and between the president of Poland and the prime minister of the Czech Republic.

Trump asserted that the funeral was due to Biden’s position as an example of the United Kingdom having less “respect” for the United States.

Trump has argued in his Truth Social past that if he was in office, he would never have taken the seat if Tarason was there. He also said that Biden was placed next to the leaders of third-world countries.

Trump wrote next to the picture of Biden sitting that “no respect”. That’s not to say – it’s a good time for our president to sit down and get to know some of the leaders of the third world. If I were president, my seat would not be there, and I would not sit there. Our country will be very different from the correct one. Now!”

He said in a later post, “In real estate, politics, and as in life, location is everything!!!

read more  TRUMP WEIGHS IN ON CNN CLOSING ATLANTA HEADQUARTERS: ‘THAT’S WHAT FAKE NEWS GETS YOU’

While Trump was not invited to attend Monday’s funeral, he was invited to a separate memorial service in Washington, DC on Wednesday, along with former presidents Barack Obama, George W. Bush, Bill Clinton, and Jimmy Carter. None of the former presidents had confirmed their presence till Monday evening.

Newsweek has reached out to the White House for comment.